What a Great Time to be Alive

I cannot put into words the awesome wonders of our Lord Jesus Christ! All I can say is that it is great to be alive (in Christ). Right before our eyes, we see the transformation of our nation and this is just the beginning! What’s even more exciting than this is the fact the Lord always shares His plans, His thoughts, and His heart with the Body of Christ if we have ears to hear and eyes to see! (John 15:15) He always tells us the end before it happens. We would not know how to do the things He does, but it is not our responsibility to figure things out (Isaiah 55:8-9). Our only responsibility is to believe (Romans 8:24) and obey what He commands us to do. Obey our instruction because the Word of God will never fail!

I can now see the awakening and transformation of the American people where only a few months or years ago, we could not even think it could be possible. The Lord released His prophetic Word and now we are beginning to see the awesome move of His Holy Spirit in the hearts and minds of the American people and our country is undergoing a major transformation. I dare say the United States of America is about to enter one of its finest hours. I see prophecies fulfilled at such an accelerated pace and here are a few things we should shout for joy about.

Prophesies Released About the United States

On March 27, 2010, the Spirit of the Lord released a prophecy for this country that the health care law would be passed but it would depend on the Body of Christ if it would be applied as the law of the land the way it was written. A few hours after the Word was released, the bill was passed. I know that millions of Americans have been praying. And now we see the healthcare law undergoing major resistance and there is the possibility it will not be applied as the law of the land. Whatever the result, God is in control, and we will continue to have the best healthcare in the world if we hold onto His promise and do what we are told to do! It is the blessing of the Lord as the believers (and this country) have sown good seed all over the world. The United States of America is the greatest country in the world and as long as we are here on this earth, it will continue to be so. Amen!

In March of 2010, the Lord also released a prophecy that He would transform this country, and we would begin to see an increased anointing on those who are living righteously, and a great move of His Spirit beginning in the summer. From the month of June through August of 2010, the Spirit of the Lord touched the lives of our youth and adults who joined into our summer bible study. I have never seen such a hunger for the things of God, and their hunger has continued to grow ever since. In our December 31, 2007 prophetic conference, the Lord released a prophecy that if we continue to rely on Him, believe Him, and obey Him that this country will have a righteous and God-fearing congress like the first congress established by the founding fathers (and if we dare to believe, even GREATER)! Mike and I, when we reviewed this prophecy, looked at each other and both purposed in our heart that we would believe God for this to manifest and continued to remind each other, our church, and God about this Word for our country. We dare to believe!

What’s Happening in the Political World

After the last November 2010 election, the whole nation was focused on Washington D.C. and what a glorious turn the Lord did in every state. All political historians now project (some would not admit it openly) that it will take more than 50 years to undo the turn of events of this last election nationwide! But, the American people have awakened and praise God, this country is returning to its biblical roots! And we at Sons of God International decree according to the prophecy released by the Spirit of God that it will not take 50 years to undo the results, but they will never be undone, and this nation will continue to move toward God and righteousness in every way, as long as the Body of Christ does her job, and walks uprightly with her first Love.

There are so many things to share and not enough time and space. Many pastors and Christians in the corporate arena heard the call of God to run for public office; they obeyed the Lord and won! This is also a fulfillment of the prophecy, released by the Spirit of God in 2003 that many of those who are in the ministry will be sent back to the marketplace. Some of those now in the marketplace will be sent back to the ministry and even to the political and education sector. This is God’s way of training and preparing His people to fulfill His Word and His plan to pour out His Spirit in every sector of society and establish His Lordship over all! Glory to God!

Isaiah 9:6 (NASB): …And —and the government will rest on His shoulders…-

While I was watching the election results last November, I was praying and thanking God as I watched and God told me to watch and see as He will start dealing with the labor unions and the education system. (Joshua 6:2 - Then the Lord said to Joshua, “See, I have delivered Jericho into your hands, along with its king and its fighting men) Keep in mind that the entire financial sector has been experiencing a major shakedown since 2008 (Hebrews 12:27 NIV “The words “once more” indicate the removing of what can be shaken—that is, created things—so that what cannot be shaken may remain.) Now we see things unfolding before our very eyes. And there are more and more wonderful and awesome things that the Spirit of the Lord will do here in this country and all over the world!

A Charge to the Body of Christ

So now I raise this question to you, “WHAT ARE YOU DOING WITH THE VISION AND INSTRUCTION THAT THE LORD HAS GIVEN YOU?"

Psalm 42:5 (NASB): “Why are you in despair, O my soul? And why have you become disturbed within me? Hope in God, for I shall again praise Him for the help of His presence.”

I know and sense that those whom God called in leadership are experiencing shaking within their souls. The Holy Spirit is beckoning the Body of Christ to break from the mold, the status quo, leave their comfort zone, and in 2011 we cannot afford to postpone our obedience to God, and our responsibility to the nations anymore. I am finding out that the Lord has been dealing in the hearts and minds of spiritual leaders even here in San Antonio, whether in corporate, education, or ministry. The anointing and the presence of God are being poured out in a mighty way, and yokes in our lives will start manifesting. This will compel us to humble ourselves and re-examine everything in our life and rightly so! The Lord said that He will start dealing with His people in the political arena and the dealing will be severe. This is good news! It is starting in the Body of Christ and will affect every sector of society. The implementation of God’s way of doing things will be in full swing, and application that we will not be able to deny this is a great move of God!

San Antonio has a great calling! When I accepted my calling in 1988, the Lord made it clear to me that San Antonio will become an oasis for God’s people. They will travel from all over the world to seek clarity, confirmation, and rest here in San Antonio. This is the reason the Lord moved me to this city and would not allow me to be close to my family in Arizona or live near my best friend in California. Years later, He moved my friend and her family here to San Antonio instead. God has moved and positioned you and your family in this city and state as well to be a part of, and even to play a major part in, this great plan of God. Please do not take this for granted or set it aside.

I am expecting the revival to manifest. This is the reason why we are actively pursuing purchasing our own facility so we will be able to hold services, prophetic and business schools, and revival healing meetings without the limitation of space or time. We are believing God for a debt-free facility so the majority of our resources will continue to be used for the preaching the Gospel to all nations and for discipleship. We are expecting revival nationwide and all over the world! So, I urge you to respond to your calling and get ready. The United States’ finest hour starts now! 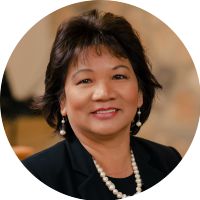 Cristina Sosso founded Sons of God Ministries International (SOGMI) with her husband Michael back in 2002. With the inspiration of the Holy Spirit she opened the prophetic and business schools at SOGMI and spearheaded the start of the "Empower A Leader, Empower A Nation" Conference which has mentored and trained thousands of ministers and business leaders all over the world. She also hosts a weekly radio program called "The Prophetic Voice of Our Time" and is presently the Senior Pastor at Freedom Fellowship Church in San Antonio, Texas.

Four years ago, the Lord spoke prophetically and said; “If My people will unite, this nation can …

A Warning to the False Prophets of Our Day